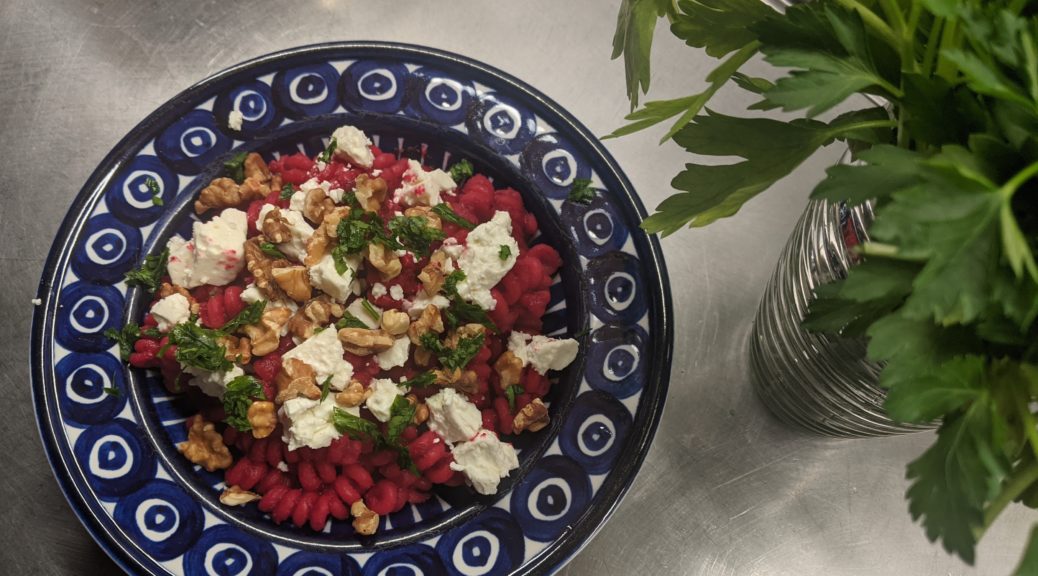 Even if this weren't so delicious, it would be worth it for the color alone.
Clothing-staining dinner for four
Shopping List

and cut them into wedges. Place the beets and

in a roasting tray and toss them with a little olive oil. Season with salt, pepper and some fresh thyme leaves. Roast 30-40 minutes, until beginning to caramelize.

Take out of the oven, trim any tough, darker bits from the beets. Put in a food processor. Squeeze the garlic from the skins into the food processor too. Add

and pulse, adding water by the tablespoonful as needed until you have a smooth paste. You’ll probably need +/- ½ cup of water.

in a toaster oven or skillet. Crumble

Return the drained pasta to the still-warm pot and stir in the beet sauce.

Note: 1 cup of dried cannellini beans, soaked overnight and cooked until tender (about 25-60 minutes, depending on how old the beans are) will yield about 3 cups, the equivalent of 2 cans of beans.

Inspired by a recipe from chowhound.com.
Looks like perfect M&C, but it's vegan and umami-ful.
Dinner for 2, sauce for 4
Shopping List

8 ounces orecchiette or other short pasta

Heat a little olive oil in a medium saucepan over medium heat. Saute

until fragrant and starting to turn lightly golden, but they shouldn’t brown. Add

and bring to a boil. Cover, reduce the heat to low, and let simmer for about 15 minutes, until the carrots are fork-tender. Stir in

The miso doesn’t have to dissolve completely. Let cool for 5-10 minutes.

in well-salted boiling water. Make a gremolata: Chop together finely (by hand, food processor or mini-chop)

Mix in some olive oil (it should be moist but not runny) and add salt to taste.

Now’s also as good a time as any to brown

tossing it few a few minutes over medium heat in a small skillet. Set aside.

Spoon the carrot-miso mixture into a blender and blend it until creamy and silky smooth, about 60-90 seconds starting on a low speed then high.

Drain the pasta and toss it with about half of the carrot-miso sauce. Save the other half of the sauce for another day; it freezes well.

Divide into bowls, sprinkle on some toasted panko and top with some gremolata.

Inspired by a recipe from feastingathome.com.

Bring a large pot of ♦ATTNwell-salted water to a boil. While you’re waiting for it to boil, peel and dice

This works best with a non-stick pan, but you can do this in any 11- to 12-inch frying pan. ♦ATTNHeat a large frying pan to a medium-high heat and add

and then add the diced onions. Saute the onions, ♦ATTNstirring from time to time, not constantly. The onions need to get well-browned, and don’t worry if a few of them get extremely dark — that is what gives the kugel its flavor. Add a generous amount of salt and pepper to them as they cook: check by tasting them. Towards the end of the cooking, if there’s a lot of browned bits stuck to the pan, add ¼ cup water to deglaze the pan, doing this while the onions are in the pan and the pan is still on the heat.

Remove the pan from heat when the onions are done, but meanwhile…

When the salted water comes to a boil, add

Pay attention to how long the noodles cook: you don’t want them to get mushy and in fact, they should be a little firm but not doughy or raw-tasting. My brand’s package said they “should cook 8-10 minutes but no more than 8 minutes if they will be added to cooked more as part of another recipe”. I cooked them just over 6 minutes, sampled one and it was done.

While the onions and noodles cook, in a very large mixing bowl beat together

When the noodles finish cooking, drain them in a colander and run some cool water over them to bring them down to room temperature. If the onions aren’t done cooking yet, add a little oil to the noodles and toss the noodles to coat. If the onions are already done cooking, proceed with the next step without bothering to add any oil. (The reason for this is that you don’t want to combine the eggs and noodles until you are ready to cook everything because the eggs will absorb into the noodles and the kugel won’t hold together. If you leave the noodles drying in the colander without adding the oil, the noodles will stick together making it hard to mix with the eggs and onions.)

In the large bowl, add the noodles and onions. Stir thoroughly. I prefer to do this with my hands to make sure everything is well mixed. Quickly wash off the large frying pan you used for the onions (if you don’t, the kugel will tend to stick), dry the pan and heat it over a medium heat, adding

When the oil is hot, add the egg-noodle-onion mixture. Smooth the top of the mixture in the pan. As the kugel cooks, you should see a crust form around the edge of the pan: this might take 5 minutes or so. Run a knife around the edge to separate the kugel from the pan. ♦ATTNThe kugel will cook about 10-12 minutes on this side, so keep an eye on the heat and make sure it isn’t cooking too quickly as you’ll end up with a very dark crust. There will still be some loose  eggs at the point you need to flip it, but not a lot. Before flipping the kugel, run a spatula or knife around the edge of the pan again and ♦ATTNunder the kugel to make sure it’s not stuck to the pan. If the frying pan doesn’t have straight sides, you can probably shake the pan a bit to see that the kugel has been loosened. Put a suitably large plate over the top of the pan, invert the pan and plate together and hopefully the kugel will be on the plate. If part of the kugel sticks to the pan, remove it with a spatula and put it where it should be. It’ll be fine.

Serve hot or at room temperature, cut in wedges. It’s also great cold, eaten while standing in front of an open refrigerator at midnight. This is often served with braised meat (gedempte) that has a sauce.

From my mother, Rita Fitterman, who probably learned how to make this from her mother-in-law, Goldie Fitterman.

½ pound assorted fresh mushrooms such as shiitakes and chanterelles

Set the head on a piece of aluminum foil, cut side up. Pour

over the top of the cut garlic, wrap it in the foil and roast for about an hour. Squeeze the roasted garlic from the skins into a small bowl and mash well. Cover with plastic wrap.

Meanwhile, on a rimmed baking sheet, toss together

Lay the tomato wedges on their sides and roast for 30 minutes or until tender and browned on the bottom. Using a spatula, transfer the tomatoes to a plate.

In a small heatproof bowl, combine

Set aside to soften, about 20 minutes. Remove the mushrooms from the liquid and rinse them under running water to remove any grit; reserve the liquid.

In a large frying pan heat

Add in an even layer

½ pound assorted fresh mushrooms such as shiitakes (stems removed) and

chanterelles, halved or quartered depending on their size

Season with salt and pepper. Cook over moderately high heat, without stirring, until deep brown on the bottom, about 4 minutes. Stir the mushrooms and continue to cook, until tender, about 4 minutes longer. Transfer to a plate.

and cook for about 3 minutes, until the shallots are translucent. Add

Simmer until reduced by half, pour in the reserved mushroom soaking liquid, stopping when you reach the grit at the bottom. Add the porcini and the roasted garlic puree.

in a large pot of boiling salted water until al dente. Meanwhile, rewarm the roasted tomatoes and the mushroom sauce. Add the sauteed fresh mushrooms to the sauce, swirl in

salt and pepper, to taste

Drain the pasta and toss with

Add the mushroom sauce and toss well. Mound the pasta into two serving bowls and top with the roasted tomato wedges,

In a large heavy saucepan, over a high heat, toast

stirring until they smell slightly nutty. It takes about 2 minutes. Remove from pan and set aside. Add

to the same pan and cook over moderate heat until the butter starts to brown, about 5 minutes. Stir in

Reduce heat to low and cover. Cook until the beets are tender, about 10 minutes.

in boiling salted water. Drain and transfer to a large warmed serving bowl. Toss the fettuccine with

Stir in the cooked beets, sprinkle with the toasted poppy seeds and add

Heat in a large heavy skillet

Saute until soft and caramelized, about 30 minutes. Do not try to rush this step. Add

Stir well, add just enough water to cover the bottom of the pan. Cover and cook over medium heat until very tender, about 45 minutes, stirring often and adding a little more water if it dries out. Meanwhile, cook

in boiling salted water. Add drained pasta to pan when the cabbage is done, toss well to combine for about 5 minutes. Serve hot, with 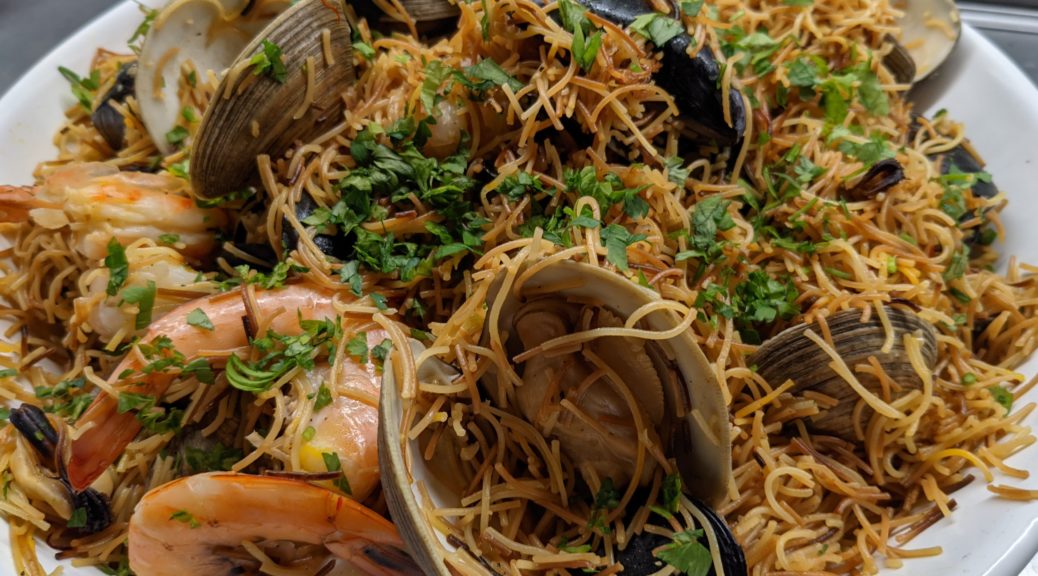 Clean but leave in their shells

Cook the clams with ⅓ cup water, covered in a 2 quart sauce pan, until the clams open. Remove from heat, set clams aside. Separate  liquid so that the silty part is removed (pour carefully and you probably don’t need to use a filter paper).

In a large pot (10-12 inches across and nearly as deep) on a medium-high or medium heat, saute until the pasta has turned golden brown to brown

Stir constantly but gently (or it flies out of the pot) until the the pasta is mostly browned. Don’t let it get black. Add..

Stir and add the mussels and the reserved clam stock. Stir regularly, and as needed add additional water. If the pasta is firm and the liquid has run out, then it needs more water. (The pasta takes about 10 minutes from when you add the clam stock to finish cooking.) When you reach the point the mussels have all opened and the pasta is nearly done, add in the clams and shrimp. Cook for a few minutes more. When the shrimp are nearly done, stir in the scallops, turn off the heat and cover to let the scallops cook. After a minute or two, it will be done.

Check seasoning, it might need salt but usually we don’t need to add any because the clam stock provides enough. Transfer to warm serving platter and top with:

Bring large pot of salted water to a boil for cooking the pasta.

In a dry skillet, heat ¼ cup panko and cook until panko is toasted to a nice golden color, about 3-4 minutes. Set aside. Meanwhile clean and chop parsley: enough to make ¼ cup.

Start the pasta cooking: we like bucatini. Cook enough for 2 people.

In skillet over medium heat, add

About 5 minutes, until soft. Add

and stir just enough to heat and break up the sardines a bit, about 2 minutes. 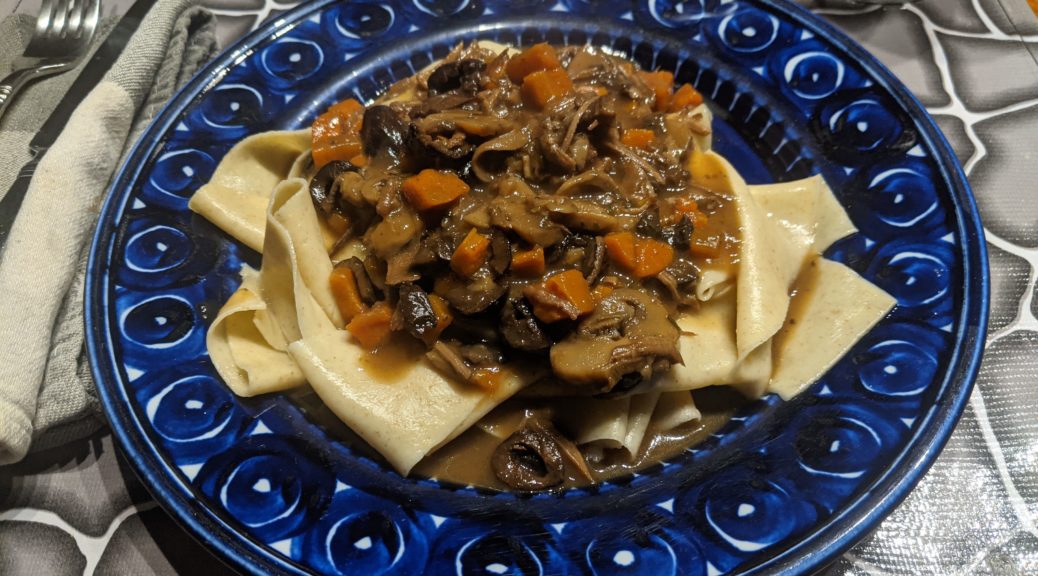 Use pasta maker or knead and roll by hand. You want the dough about 1/16th inches thick (don’t get it too thin). Dust with flour as needed and dust with semolina when it’s finally rolled out. Cut into ¾- to 1-inch wide strips. Boil for about 2 minutes or until tender; if they are fully dried, it will take quite a bit more time to complete cooking.